Red Sky at Night...... Discerning the World Around Us 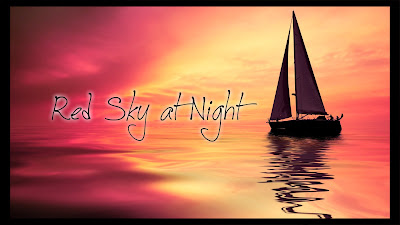 “Red sky at Night, sailors’ delight, red sky in morning, sailors’ warning.”
Joanne's friend who had a sail boat taught her that saying as they would embark on a day trip down Bush River into the Chesapeake Bay.  He could read the signs in the sky and could discern a time for safe sailing.  Jesus said a similar thing to the Pharisees and Sadducees who could discern the weather but not the times in which they were living.

Matthew 16:1-3 (NKJV)
Then the Pharisees and Sadducees came, and testing Him asked that He would show them a sign from heaven. 2 He answered and said to them, “When it is evening you say, ‘It will be fair weather, for the sky is red’; 3 and in the morning, ‘It will be foul weather today, for the sky is red and threatening.’ Hypocrites! You know how to discern the face of the sky, but you cannot discern the signs of the times.

Luke 12:56 (NKJV)
Hypocrites! You can discern the face of the sky and of the earth, but how is it you do not discern this time?

The religious leaders of Jesus’ time were seeking a sign that He was the Messiah. They refused to see the truth that Jesus came to fulfill while on earth.  There are many people today who are “seeking the signs of the times” but they are not able to discern the truth.
In these scriptures, the word, discern means:  to interpret, examine, prove, know, realize, recognize, understand, perceive, discern.
The word, time or times means: an opportune time, an appointed time or season.
Many people today would agree that we are in a season or appointed time that the bible describes as the “end times.”

Luke 21:25-26 (NKJV)
“And there will be signs in the sun, in the moon, and in the stars; and on the earth distress of nations, with perplexity, the sea and the waves roaring; 26 men’s hearts failing them from fear and the expectation of those things which are coming on the earth, for the powers of the heavens will be shaken.”

Jesus does want us to understand these times and the environment in which we are living, but with a spiritual perception which is far more complete than our five senses alone. When we see “wars, rumors of wars, nations rising against nations, famines, pestilences, and earthquakes in various places” (Matthew 24:6-7), is this the sign of His coming and the end of the age? (Matthew 24:3)

2 Timothy 3:1 (AMPC) says, “But understand this, that in the last days will come (set in) perilous times of great stress and trouble [hard to deal with and hard to bear].”

Right now in the United States, we are faced with stress and trouble from within. “Perilous times” certainly relates to the conditions of the world as mentioned in Matthew 24 but it also relates to the great level of agitation we are facing as a society. The most optimal level of proof for this is in literally witnessing the large numbers of people viewing evil as good and good as evil.

Isaiah 5:20 (NIV)
20 Woe to those who call evil good
and good evil,
who put darkness for light
and light for darkness,
who put bitter for sweet
and sweet for bitter.

The fact that we have a massive outlet for expressing views through the media has exasperated this situation. Just about any Internet search looking for information concerning Christian news or information will lead you to comments left by Internet Trolls whose only aim is to cause strife. (From Wikipedia-   In Internet slang, a troll (/ˈtroʊl/, /ˈtrɒl/) is a person who sows discord on the Internet by starting arguments or upsetting people, by posting inflammatory, extraneous, or off-topic messages in an online community) Another blatant example of “stress and trouble” comes from the language used and twisted by those who call evil good and good evil. One of their most striking terms is the word “hater”. People who adhere to biblical values, even when correctly done in thoughtfulness and caring are often branded as haters. Why? Because they believe scripture is true and have not given into the collective mantra of do whatever feels right. Thankfully, the Lord made it very clear in those same scriptures that we should expect this type of opposition. In other words, He prepared us for these times so we could discern them!

Jude 1:10 (GNT)
10 But these people attack with insults anything they do not understand; and those things that they know by instinct, like wild animals, are the very things that destroy them.

Are you discerning the times? Can you see the signs in the environment as well as signs in society that we are living in the days Jesus said would be perilous? Can you perceive His presence and the nearness of His return? If you aren’t sure then we suggest you study the scriptures we mentioned for yourself but also, pray! Ask Jesus to shed His light so you can discern the world around you. Ask the Holy Spirit to teach you and show you things to come. (John 16:13) For God will reveal such things to us through His Spirit. (1 Corinthians 2:10) Such prayers asked in faith will be answered by the Lord. You have a spirit, soul, and body and are no longer a natural being but a spiritual being.  You can discern spiritual things by the Holy Spirit who lives in you.

1 Corinthians 2:14 (AMP)
But the natural [unbelieving] man does not accept the things [the teachings and revelations] of the Spirit of God, for they are foolishness [absurd and illogical] to him; and he is incapable of understanding them, because they are spiritually discerned and appreciated, [and he is unqualified to judge spiritual matters].