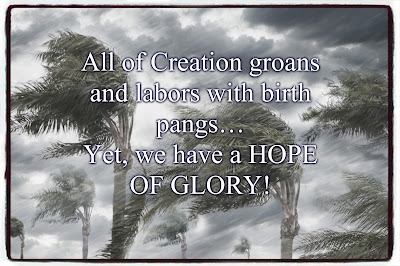 All of Creation groans and labors with birth pangs…
Yet, we have a HOPE OF GLORY!

What is the hope of glory that we spoke of in our last blog post?  It is Christ in us…

Colossians 1:27 (NKJV)
To them God willed to make known what are the riches of the glory of this mystery among the Gentiles: which is Christ in you, the hope of glory.

Paul was writing to the ‘saints and faithful brethren in Christ’ about this mystery, not only to the Jew, but also to the Gentiles to whom Paul was sent. This mystery was for all who confessed Jesus Christ as their Lord.  It is the HOPE for which we can daily be encouraged. But what does this “hope of glory” really mean? How can there be a hope of glory when the earth and all its inhabitants seem to be groaning and crying out for something. ... as we witness more earthquakes, mudslides, tornadoes, monsoons, tsunamis, and drastic changes in the climate around the world.  This ‘something’ is the HOPE of the glorious freedom spoken of in Romans 8:21.  When God’s children are ‘glorified’ at Christ’s return to the earth, all of creation will be restored. It is important here to inject the fact that if we believe God’s word then we must view this world through biblical lenses. Jesus Christ is the One who created everything, as Colossians 1:16 states:  For by Him [Christ] all things were created that are in heaven and that are on earth, visible and invisible, whether thrones or dominions or principalities or powers. All things were created through Him and for Him. (NKJV).
As our friend Dale Sides of lmci.org recently said, “We are spirit beings, not just intelligent apes.” Our hope lies in the fact that our God given spirit allows us to be transformed.
The HOPE OF GLORY for us, is when we are changed to be like Him, Jesus Christ.

1 John 3:2 (AMP)
Beloved, we are [even here and] now children of God, and it is not yet made clear what we will be [after His coming]. We know that when He comes and is revealed, we will [as His children] be like Him, because we will see Him just as He is [in all His glory].

1 Corinthians 15:51-52 (AMP)
Listen very carefully, I tell you a mystery [a secret truth decreed by God and previously hidden, but now revealed]; we will not all sleep [in death], but we will all be [completely] changed [wondrously transformed],  in a moment, in the twinkling of an eye, at [the sound of] the last trumpet call. For a trumpet will sound, and the dead [who believed in Christ] will be raised imperishable, and we will be [completely] changed [wondrously transformed].

Romans 8:19-22  (AMPC)
For [even the whole] creation (all nature) waits expectantly and longs earnestly for God’s sons to be made known [waits for the revealing, the disclosing of their sonship]. For the creation (nature) was subjected to frailty (to futility, condemned to frustration), not because of some intentional fault on its part, but by the will of Him Who so subjected it—[yet] with the hope that nature (creation) itself will be set free from its bondage to decay and corruption [and gain an entrance] into the glorious freedom of God’s children. We know that the whole creation [of irrational creatures] has been moaning together in the pains of labor until now.

Until now….. The death and resurrection of Jesus Christ jettisoned us (as humans) forward because He gave us His spirit to work with us and through us. How much more will we gain when He returns to live, rule and reign with His creation? So, when you become more aware of creation groaning, remember that it means  hope is an expectation for all of nature to possess and the Hope of Glory is a long awaited gift which will soon come to His people.
~ Joanne and Sarah