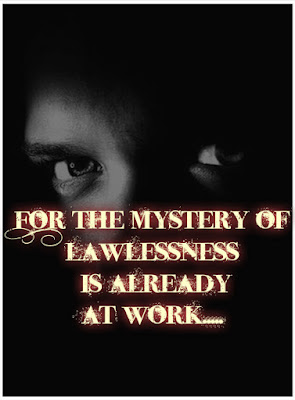 Have you ever read a suspenseful mystery novel or watched a cunning spy movie and sat on the edge of your seat wondering who the real villain was?  And to your surprise, events changed so quickly that you had to re-read the last few pages or back up the movie on Netflix to see that scene again?  There are many mysteries in the bible, and we can discuss them in future posts, however, the greatest mystery to yet be revealed concerns the villain of the End times… and he is known by many names.
He is a true enigma, whose meaning is hidden and difficult to explain.  Jeff Kinley, in his book, WAKE THE BRIDE, Facing These Last Days with Your Eyes Wide Open, calls him “History’s Mystery Man.”  In the bible, he is known as “the prince who is to come" (Daniel 9:26); “the man of lawlessness and the son of destruction or perdition.” (2 Thessalonians 2:3).   Yes, humanity has known many, many evil men but this mystery man will be like no others before him. He has also been called:
“the little horn (Daniel 7:8) and the rider on a white horse” (Revelation 6:2).  The name we perhaps are most familiar with is found in
1 John 2:18
18 Children, it is the last hour [the end of this age]; and just as you heard that the antichrist is coming [the one who will oppose Christ and attempt to replace Him], even now many antichrists (false teachers) have appeared, which confirms our belief that it is the last hour. (AMP version)
If this is the ‘last hour’ and the antichrist will be revealed, what does that mean for us?  Can we know from scripture the order of events in these last days?
There is a “mystery of iniquity” that is spoken of in the bible. Iniquity means lawlessness.
2 Thessalonians 2:7 (AMPC)
7 For the mystery of lawlessness (that hidden principle of rebellion against constituted authority) is already at work in the world, [but it is] restrained only until He who restrains is taken out of the way.
Note*         2 Thessalonians 2:7 Many believe this One Who restrains the antichrist to be the Holy Spirit, Who lives in all believers and will be removed with them at Christ’s coming for them in the ‘catching away’ of the Church or Bride; the rapture  (harpazo).
Verse 8 follows with a small word, “then”….
So, AFTER the Restrainer is taken out of the way (the Holy Spirit and all those who have confessed Jesus Christ as their Lord, and have been sealed with the Holy Spirit of promise) and removed from the earth in the ‘great departure’, THEN
8 … the lawless one [the Antichrist] will be revealed and the Lord Jesus will slay him with the breath of His mouth and bring him to an end by the appearance of His coming. 9 The coming of the [Antichrist, the lawless] one is through the activity of Satan, [attended] with great power [all kinds of counterfeit miracles] and [deceptive] signs and false wonders [all of them lies],10 and by unlimited seduction to evil and with all the deception of wickedness for those who are perishing, because they did not welcome the love of the truth [of the gospel] so as to be saved [they were spiritually blind, and rejected the truth that would have saved them]. 2 Thessalonians 2:8-10 (AMP)

The deception is on-going and many will continue to be deceived.  The only antidote for this deception is to believe on the Lord Jesus Christ and call upon Him. (Romans 10:13) Please do not take this lightly. God’s word clearly tells us that this deception (which has already begun) is powerful. Thankfully, Jesus is so good and so gracious to those who believe in Him. When we choose to literally call on Him, He will show us things great and mighty which otherwise we simply could not figure out on our own. (Jeremiah 33:3)

The love of the TRUTH about Jesus Christ, the Son of God, Who gave Himself for us so that we could have everlasting life (John 3:16), is the ONLY HOPE for people who are alive today.
Posted by HeraldOfHope at 4:04:00 PM