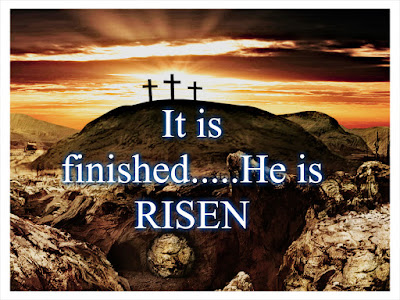 What did Jesus mean when He said, “It is finished”? Why is it important for us to know what He accomplished in His death and resurrection?

John 19:30 (AMP)
When Jesus had received the sour wine, He said, “It is finished!” And He bowed His head and [voluntarily] [a]gave up His spirit.

Note* John 19:30 this wording implies that Jesus voluntarily and sovereignly released His spirit from His body in submission to God’s plan.

The word, “finished” in the original Greek means: to finish, complete, fulfill; to be perfected, accomplished; performed.  Jesus Christ came to redeem mankind, to pay for all their sins, transgressions and iniquities, and to fulfill the law and prophets. Jesus “was betrayed and crucified because of our sins, and was raised [from the dead] because of our justification [our acquittal—absolving us of all sin before God].”  (Romans 4:25 AMP)

To be acquitted means: to free (someone) from a criminal charge by a verdict of not guilty. Who was guilty? All of mankind including the people who do “good” works. Who charged us with crime? Satan did: through treachery he brought corruption and death into this world and brought down all of humanity. Stay with us here, because we know that this can all seem difficult and many choose to shy away from this truth, but the next part is fantastic.

We have been acquitted in the high court of heaven by Jesus Christ, the Messiah (the ‘anointed one’)!  He is our heavenly Father’s Son, who was crowned as King, even at the crucifixion.  Pilate had the words, “JESUS OF NAZARETH, THE KING OF THE JEWS” hang above Jesus’ head on the cross as an announcement for all to see. It was written in Hebrew, Greek, and Latin. (John 19:19-20)  However, the Pharisees did not agree with this “accusation written against Him” that Pilate had the soldiers post above Jesus on the cross.

Luke 23:1-2 (NIV)
Then the whole assembly rose and led him off to Pilate. 2 And they began to accuse him, saying, “We have found this man subverting our nation. He opposes payment of taxes to Caesar and claims to be Messiah, a king.

Jesus Christ will be crowned as King of all kings, as stated in Revelation 19:16 “On his robe and on his thigh he has this name written:  KING OF KINGS AND LORD OF LORDS.” (NIV) At the cross, a crown of thorns was put on Jesus’ head, which was symbolic of the crown He will wear for all eternity.   Even the day and hour of Jesus’ crucifixion is significant.  As the Passover lamb was being sacrificed, Jesus Christ was being crucified on the cross on Calvary’s hill.  The time of Passover is the Hebrew month of Nisan, which is the ‘beginning of months’ (Exodus 12:2) and was considered the New Year for the Kings, when in the Old Testament the Kings were anointed.  (See the article, “Secrets of the Crown of Thorns” by Dr. Danny Ben-Gigi, Prophecy Watcher 03.2016 magazine, www.prophecywatchers.com)

Three days after a heavy stone closed His tomb, when some women came bringing spices, they found the stone rolled away from the tomb.  Two men stood by in shining garments and said, “He is not here; he has risen! Remember how he told you, while he was still with you in Galilee: 7 ‘The Son of Man must be delivered over to the hands of sinners, be crucified and on the third day be raised again.’
Luke 24:6-7 (NIV)

This is the story of the Resurrection, familiar to many people.  What may not be taught so clearly, is the truth about what Jesus really accomplished in His death and resurrection.

1 Peter 2:24 (NKJV)
Who Himself bore our sins in His own body on the tree, that we, having died to sins, might live for righteousness—by whose stripes you were healed.

Isaiah 53:5 (AMP)
But He was wounded for our transgressions,
He was crushed for our wickedness [our sin, our injustice, our wrongdoing];
The punishment [required] for our well-being fell on Him,
And by His stripes (wounds) we are healed.

Matthew 8:17 (AMP)
So that He fulfilled what was spoken by the prophet Isaiah: “HE HIMSELF TOOK OUR INFIRMITIES [upon Himself] AND CARRIED AWAY OUR DISEASES.”

Isaiah 53:5 says “we are healed” and 1 Peter 2:24 says “we were healed”.  The truth is that Jesus Christ’s body was broken so ours could be whole.  His blood was shed so that our sins would be forgiven.  This is now a finished work and we are to remember this whenever we take communion.

Luke 22:19-20 (NKJV)
And He took bread, gave thanks and broke it, and gave it to them, saying, “This is My body which is given for you; do this in remembrance of Me.” Likewise He also took the cup after supper, saying, “This cup is the new covenant in My blood, which is shed for you.”

We receive healing by the broken body of Jesus Christ and we receive forgiveness of sins by His shed blood.  All this happened at the cross and more…

Colossians 2:14-15 (NIV)
Having canceled the charge of our legal indebtedness, which stood against us and condemned us; he has taken it away, nailing it to the cross. 15 And having disarmed the powers and authorities, he made a public spectacle of them, triumphing over them by the cross.

This “handwriting of requirements that was against us” is the law in the OT that God gave to His people.  If even one commandment was not kept perfectly, a charge of all were made against them.  These commandments were given to show the people that they needed a savior, and He came in the person of Jesus Christ.

Galatians 3:13-14 (AMP)
Christ purchased our freedom and redeemed us from the curse of the Law and its condemnation by becoming a curse for us—for it is written, “CURSED IS EVERYONE WHO HANGS [crucified] ON A TREE (cross)”— 14 in order that in Christ Jesus the blessing of Abraham might also come to the Gentiles, so that we would all receive [the realization of] the promise of the [Holy] Spirit through faith.

Jesus’ accomplished work on the cross enables us to walk in strength and health all the days of our lives.  He has set us free from the curse of the law and from the hand of the enemy of darkness.  He has forgiven us of all our sins. He has qualified us and given us an inheritance. This is the good news of the gospel!

Colossians 1:12-14(NKJV)
12 giving thanks to the Father who has qualified us to be partakers of the inheritance of the saints in the light. 13 He has delivered us from the power of darkness and conveyed us into the kingdom of the Son of His love, 14 in whom we have redemption through His blood, the forgiveness of sins.
We can be encouraged in our lives and finish the work that is before us each day.    Jesus Christ, our Risen Lord and Savior, is seated now beside the Father in heaven. He is our hope, our encourager, our supplier, our healer, our friend in time of need.  All we need is to keep our eyes on Him!

Hebrews 12:1-2 (NKJV)
“… let us run with endurance the race that is set before us, 2 looking unto Jesus, the author and finisher of our faith, who for the joy that was set before Him endured the cross, despising the shame, and has sat down at the right hand of the throne of God.”

We have been acquitted! We have been redeemed! …. And we can be joyful today!
~ Joanne and Sarah