Do You Know What the Future Holds? 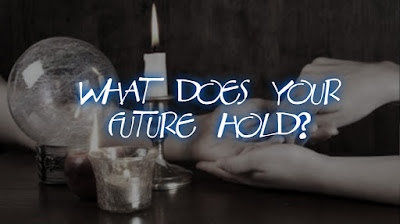 Have you ever wanted to know exactly what your future holds?  Who will you marry?  What career will be a good one for you?  Will you travel?  Become famous?  Do you know people who seek insights into their lives through fortune tellers and psychics?  Have you ever wondered what the lines on your hands mean, or what tarot cards could predict about your future? Are there people who truly are able to predict the future and be accurate?

Some of you may be surprised to learn that the Bible is full of descriptions about psychics, sorcerers, and prophets.  A psychic is a person who is sensitive to forces beyond the physical world. They have precognitive abilities which most of the rest of the population do not seem to possess. Precognition is a modern term which simply means being able to see events which will take place in a future time.  Psychics are often called a “spiritualistic medium”. Because psychics are all the rage right now, and for those with precognitive abilities, there is a heap of money to be made. What our society once considered as back room, gypsy fortune telling has become chic and popular. Yes, all the cool people are doing it.

You may also be surprised to know that we, as bloggers for Jesus Christ, who devote our posts to bringing you hope in Jesus, would even be discussing psychics. That is because we have found the church to be sadly ignorant of many aspects of the spirit world which are constantly working in our midst. What we hope won’t surprise you is that we believe the Word of God clearly illuminates what true precognition is and how it can operate to bring Him glory. Furthermore, we will show you that the information which psychics receive, (even when it turns out to be accurate for the client) comes from a source which ultimately leads to destruction.

As we have already stated, a psychic is a person who has the ability to ‘see’ into the future. Where does their ability come from? We believe that all people created by God have differing abilities in which He, our creator, has bestowed upon us. Therefore, people who have a true ability to see into the future are simply born (or created) that way. Having said that, are we saying that Christians who can see into the future are psychics? No, we are not. Christians with precognitive abilities are called prophets. Now, we are fully aware that there are people out there who claim to be precognitive, both psychics and prophets, but simply are not. This discussion doesn’t deal with them. We are only talking about individuals with real abilities. We will show you the difference between psychic readings and prophetic words from God. We will show you how to tell the difference and we will also show you what the “power source” is for each. We truly hope to enlighten those with curiosity and genuine interest in this topic to recognize that only God knows the future.  Only when revealed through His Holy Spirit, does this knowledge do us any good.

Another name for a psychic in the Bible is a sorcerer.  No, not like the Sorcerer’s Apprentice, which was a childhood favorite for many people.  Who wouldn’t like to see Mickey Mouse conjure up spells?

Two Greek words describe sorcerer: 1) magos = a magician, a wizard, sorcerer, a pretender to magic powers, a professor of the arts of witchcraft; 2) pharmakos = devoted to magical arts, a sorcerer, especially one who uses drugs, potions, spells, or enchantments.  These are called “false prophets” in the Word of God. Let’s say that again, the Bible calls what we today call psychics, false prophets. That means they are dealing with a counterfeit form of spirituality. A counterfeit is something made in precise imitation of something valuable or important with the intention to deceive or defraud. For example, a counterfeit $50 bill is difficult to recognize unless a person is trained to do so.

Acts 13:6, 8-10 (NKJV)
6 Now when they had gone through the island to Paphos, they found a certain sorcerer, a false prophet, a Jew whose name was Bar-Jesus,
8 But Elymas the sorcerer (for so his name is translated) withstood them, seeking to turn the proconsul away from the faith. 9 Then Saul, who also is called Paul, filled with the Holy Spirit, looked intently at him 10 and said, “O full of all deceit and all fraud, you son of the devil, you enemy of all righteousness, will you not cease perverting the straight ways of the Lord?

Paul, who was filled with the Holy Spirit of Truth (John 16:13) recognized Elymas as a “false prophet” who was trying to deceive the proconsul away from the truth of the gospel.  A true prophet of God is “one who speaks forth openly; a proclaimer of a divine message; a seer”. (Vines’ Complete Expository Dictionary of Old and New Testament Words, W.E. Vine, 1996., p.493)
The true “power source” is the Holy Spirit.

John 16:13 (AMP)
But when He, the Spirit of Truth, comes, He will guide you into all the truth [full and complete truth]. For He will not speak on His own initiative, but He will speak whatever He hears [from the Father—the message regarding the Son], and He will disclose to you what is to come [in the future].

Therefore, although a true psychic has pre-cognitive abilities, their information does not come from the Spirit of Truth which is the Holy Spirit. Sadly, there are many psychics who do not understand where their information is coming from. While having a gift, they still have been deceived into believing that their ability comes from a benevolent source. This is the real danger in seeking a psychic!
Psychics are seeking a power source that is not from the Lord.  They invoke familiar evil spirits who know their unwitting victims, and through lies and manipulation, perpetrate the hoax that the future that has been described will happen. Often times a psychic giving a reading will inform their client that what they see can be changed if the person so desires. They claim that what they are seeing is only a possibility and that it is ultimately up to the individual’s free will. This differs from true prophecy which always comes to pass since it is from the Holy Spirit of Truth.  Too many people, including Christians, believe that it is OK to give their attention to a psychic or palm reader when they should be seeking the truth directly from God.

Acts 8:9-10 (CEB)
9 Before Philip’s arrival, a certain man named Simon had practiced sorcery in that city and baffled the people of Samaria. He claimed to be a great person. 10 Everyone, from the least to the greatest, gave him their undivided attention and referred to him as “the power of God called Great.”

True prophecy ALWAYS tells of Jesus Christ, and highlights the promises He accomplished and provided for us at the cross.

Revelation 19:10 (AMP)
10 Then I fell down at his feet to worship him {the angel}, but he [stopped me and] said to me, “You must not do that; I am a fellow servant with you and your brothers and sisters who have and hold the testimony of Jesus. Worship God [alone]. For the testimony of Jesus is the spirit of prophecy [His life and teaching are the heart of prophecy].”

What we want to end with here is not a condemnation of anyone who has received psychic readings or fortunetelling. Jesus loves us all and His death on the cross and resurrection was for the purpose of saving us from the realm of darkness. What we earnestly say to you, is that Jesus is the way, the truth, and the life. (John 14:6) Furthermore, if you believe that you have precognitive abilities, then thank God and then surrender those abilities to Him. God uses His humble servants for His glory. If you are called to be a prophet, then be a prophet. Stay true to His Word and stay in His presence. If you would like to know more on this topic, then we encourage you to read an article: “An Exposé on Psychics: Who They Truly Are and How They Truly Work,” written by our mentor and friend, Dr. Dale M. Sides, president of LMCI Ministries and one heck of a teacher. If you want to know more about this incredible power source we know as the Holy Spirit, then Dale’s teachings will help to increase your knowledge in the Lord. You can find a wealth of information at www.lmci.org .

Lastly, we hope we have piqued your interest in this truth.  We plan to share more interesting, out of the mainstream box, topics soon. Also, once we enter into the season of celebrating the birth of Jesus, please look for our article on The Mazzaroth…… the Truth Behind the Counterfeit Zodiac. We believe you will be every bit as blessed as we have been.
God bless you all!
~ Sarah and Joanne